When God births a Movement 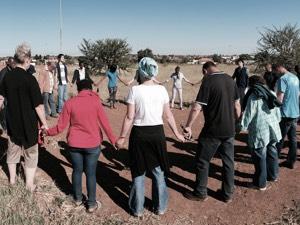 When God births a movement, He works through many different people. In a previous article we looked at two roles in the church that often have little tolerance for one another – the hunter and the herder. But when hunters and herders begin to appreciate one another and work together, we see healthy movements emerge.

However, as much as hunters and herders often misunderstand one another, they often both misunderstand and under-appreciate the roles of the strategist, catalyst and activist. The reason we are so slow to recognize these roles, is because they are largely hidden. But in true movements, you will always find them. How do these people contribute to movements?

Strategists help us to do the right things. We need them, but they cannot operate alone. Strategists on their own make great plans that lead to nothing. Catalysts help things to begin. But catalysts on their own start lots of things that quickly collapse. Activists get people involved. But activists on their own rally people towards empty and meaningless causes. The three need one another. An individual may have a mix of these gifts, but seldom do we find all three at full capacity in one person.

The greatest movement we have on planet earth today, the church, was the result of a team effort. The Father had a strategic plan to save mankind. The plan needed a catalyst – someone who would come to earth and make the first disciples. As the catalyst had completed his job and was leaving, He promised to send an activist from the Trinity to complete the mission. The Holy Spirit provided the ongoing power and made true activists of the first disciples. They were empowered to witness and enlist large numbers of people.

The first two roles can be outsiders to the target people group, but the activist is always an insider empowered by the Spirit. Birthing movements takes hard work and passion. Prayer and faith are non-negotiable. No prayer, no power. No work, no results. These are obvious elements to launching movements. Yet we often forget that battles are not only won on the battlefield, but also in the planning, strategy and subsequent execution. Fiery passion without a good plan leads to defeat. Hard work without smart work can lead to fruitless work.

The role of the strategist is to avoid fruitless work. When the strategic work and planning have been done well with full attention to detail, the work of implementation is always much easier and more fruitful. A strategist is sometimes a wise, old mentor. At other times it may be a spouse, a sibling, a good friend or a co-worker who fills this role. Jethro was a strategic counsellor to Moses. His advice saved the well- meaning and hard-working Moses from total burnout. Jethro did not lead Israel. He quietly influenced Moses and gave him step-fatherly advice that greatly enhanced his leadership ability. Behind every successful leader, you will find a skilled, wise and experienced strategist. Strategists are vital to movements. They are the architects and designers. Their role is often undervalued. But strategists on their own are unable to mobilize or launch movements.

The catalyst is the one who actually begins the movement. Catalysts are able to convert paper strategies into practical realities. They have great faith. They are able to “call those things that are not as though they are” (Hebrews 11:1-3). But catalysts do not always have the ability to sustain the works they start. If catalysts begin movements, activists help movements to gain momentum. Every movement needs momentum to survive. An activist is the person who manages to rally large groups of people towards the cause. People often undervalue the activist. They will latch onto the cause and then often forget the activist who enlisted them. Every movement needs activists. The biggest mistake the leaders of a movement can make is to undervalue the activists who rally people towards the goal.

Activists may not always become leaders in the movement, but their role is invaluable. Paul was an amazing strategist and catalyst. Through on-going revelation, he had amazing insight into God’s eternal plan for the church. He wrote this down in letters to the new churches. Through the ages, the church has gained enormous strength from understanding the big picture. Paul was also a great catalyst. He was able to start new work in places where no church existed. But Paul does not seem to be much of an activist. In fact, it seems that a real movement is only released on his third missionary journey. Here we find him in the lecture hall of Tyrannus. Again, he is not acting as an activist, but as a catalyst. A movement is launched across all of Asia as Paul functions in the role of strategist and catalyst.

One reason that people undervalue the roles of the strategist, the catalyst and the activist is pride. Some people are unable to acknowledge the input of others into their lives. When they see success, they want the recognition rather than acknowledging that all success is a result of God working through a team of people. As Paul said, “one person plants, one waters and another reaps.” We easily forget the work that went into planting and watering.

Another reason people fail to acknowledge these roles is because they are stuck in a clergy/ laity paradigm. Some people are simply blinded to the fact that they are building on their own charisma and personalities rather than on Christ. They are so busy doing the work of the ministry that they fail to see Kingdom ministry as a movement of ordinary people not professionals. The strategist/ catalyst/ activist team is able to mobilize thousands of ordinary people into ministry. This makes those who are wearing themselves out in ministry – seeking recognition – envious and thus critical. They fail to see that Kingdom movements are released through smart work as well as hard work.

A third reason that people fail to recognize these roles is that they refuse to work in team or they fail to recognize people with different strengths to their own. Strong teams form when differently gifted people come together and find their roles in fulfilling the mission. Independent people fail to understand that they need to be surrounded by people unlike themselves. They attempt to project their own strengths and personalities onto others. As a result, they end up with unbalanced teams that are unable to release movements. Every strategist needs a catalyst

Every catalyst needs an activist. Every activist needs a cause. Every movement needs all three.

Find your role. Work in team. The result is a movement.