What Korea taught me 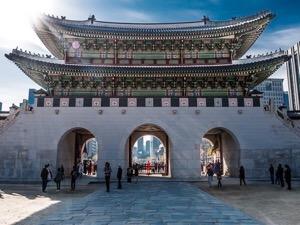 ‘A North Korean soldier races for the border in a jeep and then on foot before his former comrades shoot him at least five times as he limps into South Korea, where he collapses and is dragged to safety by southern soldiers...’

This was the news headline the day we visited ‘one of the world’s most dangerous borders’ according to NY Times. Tensions at the DMZ (Demilitarized zone) were high, following the shooting the previous day. I was constantly aware that I was visiting a region of the world that is still in deep conflict. The DMZ is 250 kilometers (160 miles) long, and about 4 kilometers (2.5 miles) wide.

Setting eyes on North Korea and hearing the pain-filled history was sobering. Crawling through the third underground incursion tunnel (nicknamed the tunnel of aggression) dug by the North to invade the South was surreal. Gas masks every few meters were a stark reminder that the two countries are still technically at war. With no official peace treaty, there have been several incidents in and around the DMZ, resulting in military and civilian casualties.

Besides the sadness and somber emotions, something else was stirring in me as I looked out at North Korea. In 1907, a 40-year revival broke out in Pyongyang. Termed the greatest success story of Protestant missions, it swept across the Korean Peninsula like wildfire. A key characteristic of this revival was a deep repentance of ethnic hatred - something so desperately needed in my own country, South Africa. Even as I longed for God to do it again in Korea, I prayed that God would do the same in my nation.

A mere 53 kilometers (35 miles) south, is the beautiful city of Seoul. Here, the bustling streets explode with life in defiant contrast to the deserted DMZ. I arrived two days early for the Accelerate training we were to give and spent the time exploring the colorful city. By day, the fiery autumn hues decorated the streets - a photographer’s paradise. At night, those same streets came alive with lights, music and all kinds of Asian delicacies. I frequently had to ask for directions and found people very friendly and willing to assist. Of course, I do not speak Korean and most people know little or no English, so we often resorted to sign language! The streets, buses and trains were crowded until late at night. South Koreans love to protest and I found myself in the middle of several large rallies and political protests. Getting lost in the City was a fantastic way to learn the culture and prepare for the days to come.

I was in Seoul to train 80 leaders and pastors in the principles of movement. South Korea has a strong Christian influence (16.44% evangelical) and has been a tremendous global missionary sending force. Across the road from my hotel was Yoido Full Gospel Church, one of the largest churches in the world claiming over 800 000 members. Yet, there has been a serious decline of Christianity in recent years. Less than 30% identify as Christian and nearly 60% of South Koreans claim no religious affiliation. Every megachurch in the city has been rocked with a sexual or financial scandal. There is a dramatic falling away of the next generation. They no longer connect with the prevailing Christian culture. The churches I visited were overwhelmingly filled with an older generation, while the streets were filled with young people. I soon realized that South Korea is facing the same millennial crisis that other westernized nations are facing.

Cross-cultural and cross-language communication is never easy. Several times during the training we had to pause while our translators sought to bring clarity. But the participants were eager and desperate for answers. The challenges they face are formidable. This passion led to some heated discussions - very unlike the civil and respectful south Korean culture. It was clear that some of these leaders were wrestling with the implications of the training. They were intent on implementing what they were hearing. Some of them have emailed me since the training with very encouraging indications that their lives and ministries have been deeply impacted.

Korea - both north and south - stole a piece of my heart. They taught me that movements of the gospel are desperately needed in both restricted and open countries. The 1907 move of God in Pyongyang taught me that revival can bring dramatic healing to racial and ethnic divisions. It also taught me that revivals come and go, but every generation needs to re-discover God.

Seoul taught me that even the largest church in the world cannot reach a city or nation alone. I learned that even in a city that seems mono-cultural, there are still big gaps between different affinities and age groups. In order to reach cities, we need diverse, fresh expressions of church that continually multiply into every affinity.

South Korea – I will be back. Until then, I will be praying earnestly for you...