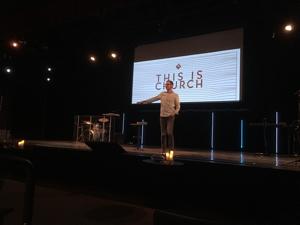 As soon as I drove into the parking lot, I knew that God was up to something.  To be honest, I did not really want to be there.  But God was about to catch me by surprise.  Over the years, I have been shown a handful of insights about the future.  They have always been right.  This article contains one of those glimpses into the next 20 years.

I have attended many churches in the USA.  I have to admit that the vast majority of them leave me cold.  I assure you that this is not an attempt to criticize or tear down.  I simply long to see the church become what she was meant to be.  Most churches that I have attended do not give me much hope for the future.  They are usually either stuck in the past or have become slaves to the popular culture.

That morning, I actually wanted to go and experience this particular church.  But I was also exhausted.

We had been on the road for two weeks, covering three cities, speaking to different groups of people every day.  Brad, my fellow traveler, insisted we attend the service.  It was a hard sell.  We had already been to one church and this would be our second one for the day.  He bribed me with a cappuccino. (I guess I’m a cheap caffeine addict!)

The church met in a small rented space.  This was their third service of the day.  Most people looked younger than 30.  Many looked like college students.  By the time the worship started, I was wiping my eyes and choking back the tears.  I felt more alive than I have in years.  For over a decade I have known that Millennials represent the greatest spiritual hope for America.  Now I was experiencing it.

The worship blew my mind.  It was not the music that drew me in, but something intangible and indescribable.  It was professional without being consumer-driven.  It carried a sense of authenticity.  It felt raw, real and deeply Divine.  It focused on emotion and spirituality rather than showmanship.  The message focused on sanctification and discipleship in the context of community.  This was a stark contrast to most other messages I had heard so often that focused on individual sin management.  Or worse, licentious grace.

I desperately tried to wipe away my tears. As I attempted to control my embarrassment, I heard a familiar voice speaking: “This is where you need to be.  I want you to dedicate yourself to this generation.  They will carry my message with presence, power and without pretense.  They are hungry and ready.  Reach them.  Mobilize them.”

The meeting ended with a benediction.  The words, echoed by the congregation, still reverberate in my mind: “Wherever you are, be the gospel.”  This was not lip service.  I had already been challenged to be on mission and been handed a pamphlet with 15 different city-wide projects.  I had been asked by ordinary church members which project I was going to be serving in.

I left City Church in Tulsa, Oklahoma deeply challenged.  But more importantly, I left with a renewed vision.  This next season of my life will include deeply engaging the Millennial generation.  I will be wrestling with how to reach and mobilize Millennials - but not only because of their age.  Sure, they are young and represent the future leadership.  But there is a bigger reason that God will use this generation.  They hate dead religion.  They are real, raw and authentic.  They yearn for community.  They were shaped through the recession of the 80’s and as a result have a healthy skepticism of materialism.  Their rapidly changing world has made them remarkably flexible and able to handle ambiguity.  I firmly believe that God has raised them to be a voice of healing, power and conviction.

Over the next decade, I will be committed to working with and building teams that reach Millennials.  I have no idea what this means.  I am about as far from this generation as you can get.  I am not “cool.” I do not share their dress code, nor do I speak their lingo.  But I do share many of their heart values.  As a global strategist, I cannot make this my only focus.  But mobilizing Millennials will without a doubt become a primary focus of my life.

Today, I read your article!

Today, I read your article! To be honest, I don’t always read them - but I read this one and it got me teary! I love you and am honored to have you as my dad! Love, Emily

Good stuff! Thanks for

Good stuff! Thanks for sharing your heart, David.

God bless you, David for

God bless you, David for sharing this. As you know, I live in the Dallas, TX area and I have 2 children that are 30 and a daughter in law who is 27. I see in them what you were writing about: they are searching for authenticity and community. They struggle with it, they love it, they are frustrated with it, but they uphold it. They want to be related to reality - the reality of friendship and the reality of God. No doctrinal and theological mumbo jumbo, just the raw Gospel. As they live life together and share Jesus along the way, they touch each other with the reality of their struggles and joy, and they find that the Gospel is not only about individual salvation, but mostly about community: community with each other, community with Jesus, and community with the tangible Gospel. This is a fertile soil for movements and I am committed to catalyzing this generation for reaching far for the Kingdom.

Hi David - lovely to have

Hi David - lovely to have read your article, and more lovely that you were able to find a real Church, and in USA ! Wow, you had to be led by the Lord to get there! Anyway, I just consulted to a Medical Scheme Administrator wanting to set up a new Medical Scheme. I told them to go for the under 25's and call it Millennial Med. So yes - the millennials are where it is at ! I relate to and love their open hearts and minds. They want God, not church.

LOVE this David!!!!!!
Authenticity, real, raw, vulnerable, deep to deep. Words I have been talking about, praying about, looking for and trying to live by more and more each day! I am convinced this is the way forward.... I am in!!! Thank you for sharing. May He blow you away by the next purpose birthed in your heart. I would love to hear more about this church...

I am at a loss for words,

I am at a loss for words, which is miraculous in itself.
Sooo glad that you had this CHURCH experience and that you shared it!
As Prince Hamlet said in 'Hamlet’: "Oh, my prophetic soul!"
Tonight, I made a joke with you about working 'with me' as an effective leader - after reading this, I’m hoping it was in fact prophetic and not a joke at all.
May God bless you as you go and grow Millennials for Him!

Grateful that you shared this

Grateful that you shared this experience and vision to mobilize the millennial generation, with us. We are with you in this vision ,David!

Hi David, this is so

Hi David, this is so encouraging, that there are churches out there like this. I am experiencing the same as you have written at the church we are now attending near Rockingham, West Australia. Real, no pretense, very little praise - mostly worship focused, community building, wrecked lives being made alive, on a heart journey with Jesus. Very encouraging seeing your daughter writing about her Dad as she has!! Special!

Amen, amen. Der Herr wird die junge Generationen benutzen! Thanks, David, for this insight and sharing your heart here. I was just with German millennials in a in a growing home fellowship and they want the same!

Isn't God just so awe striking! Isn't He just out of this world! Wow, I don't even know where to begin. But firstly, thank the Almighty Father for who He is and all He does and what He is revealing to you. We really need to start moving and shaping the people in a more genuine way. You're definitely right about the millennials hating religious practices, I know this because I am one of them. And Santie would also testify that in high school when she was still teaching us that, we'd always challenge what we were taught. And though we didn't understand why at the time it was so that we could have a deeper understanding of what we believe. So again, David thank you for such a moving message and I am with the movement/vision!
God bless you.

I call it passing the button

I call it passing the button of faith to the next generation and you , David are the best at it . You may not be cool and not speak the lingo but your heart is in the right place. and as you said earlier you are available, and God will use you.

We've seen your article, read it, absorbed it, loved it and are looking forward to what is to come. Exciting days ahead.